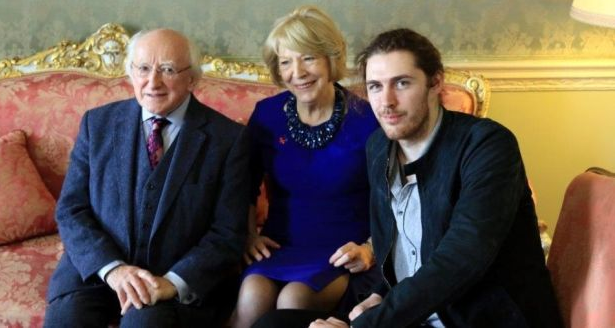 Visit To Aras An Uachtarain

Hozier joined the President of Ireland, Michael D. Higgins at his official residence, Aras an Uachtarain, for a special event as part of the #FaceUpToDomesticViolence campaign.  Hozier performed Cherry Wine for the invited guests.

President Higgins is one of the Champion World Leaders of the He for She campaign. He and his wife Sabina are also supporters of Safe Ireland’s Man Up movement, which promotes the role men can play in ending domestic violence.

The President said the event was an appeal to men to say “your assistance, your new thinking, your action, your willingness to speak out is necessary if we are to join with the 50 per cent who are not achieving their full rights”.

You can listen back to full coverage of the event on the Irish Times’ Women’s Podcast.